During my Mayoral year my charity appeal raised over £10,600 which was divided between local charities.

Although a relatively new member to the Council I was selected by the members of the Conservative Group of Councillors to stand as the Mayor designate and eventually elected by the full Council to serve as the Mayor from May 2015 to May 2016.

It is an honour which can only be achieved once in any Stafford Borough Councillor's life since you can only be the Mayor once. You are able to be the deputy mayor many times but only once as Mayor.

There is no training to be Mayor and along with my wife Joy who became the Mayoress we were supported by the mayoralty team. Who assist you with preparations during the year.

The Mayor has a secretary whom he shares with the Chief Executive and Council Leader, two chauffeurs, one of whom is the Mayor's Sergeant for civic occasions and an assistant secretary.

Luckily for the Mayor and Mayoress the team have all been through the many events which are attended by the Mayor many times and know the form.

On average a Mayor will attend anything from 300 to 600 events during his year ranging from opening garden fetes to opening the Courts. The history of the mayoralty in Stafford goes back over 400 years and is worth a read.

MY YEAR AS MAYOR 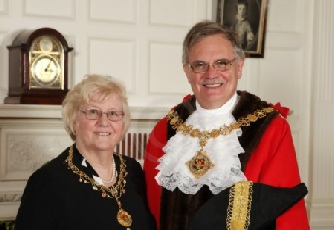 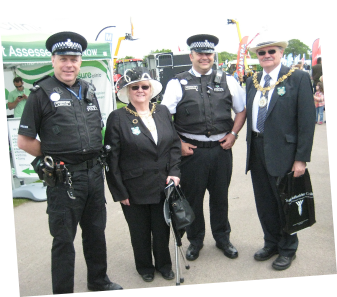 Me in the formal robes of the Mayor which are not needed often except for formal occasions. The opening of the courts, Remembrance Sunday,  chairing the Council meetings etc. Usually the Mayor wears a smaller piece of jewellery referred to as ‘Day Wear’.

Behind every successful man so they say is a woman and in my case it was my Mayoress my wife Joy who was with me at 99% of the events we attended.

Mayor and Mayoress with Bobbies at the County Show. 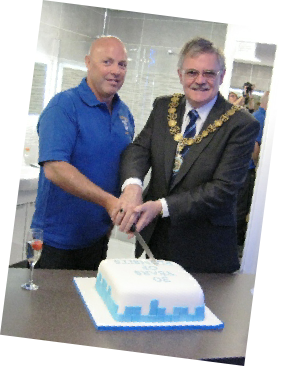 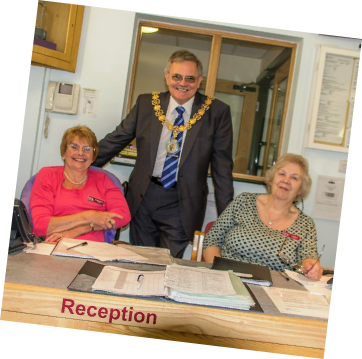 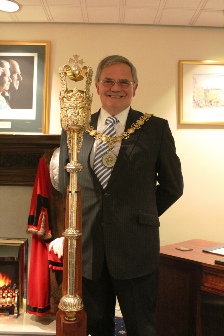 Mayor with the Great Mace 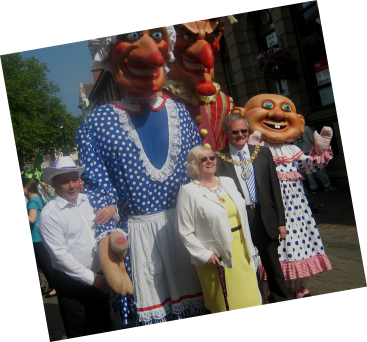 Members of the Stafford Borough Council can be Mayor only once, but Councillors can be the Deputy Mayor often.

In 2018/2019 Eccleshall’s Borough Council Peter Jones and his wife Joy were elected to serve as Deputy Mayor and Deputy Mayoress.

In 2019/2020 they were re-elected to serve again as Deputy Mayor and Deputy Mayoress which set a new historical record, never before had a councillor served back to back terms as the Deputy Mayor.

At the Borough Council meeting held in the County Council chamber on Tuesday February 25 2020 Peter was once again elected to serve as Deputy Mayor for a third term.

Peter and Joy are great believers in maintaining history and in supporting the Mayoralty and have endeavoured to support whoever was the mayor whilst in office.

The Borough Council has a four-year term in office between elections and the size of the political party’s representation on the council decides who will be the Mayor and Deputy Mayor with full council approval for one year from May to May.

In 2020 / 2021 it was the turn of a Labour councillor to be the Mayor and once again Peter chosen to be the Deputy Mayor. However due to the Covid restrictions the Mayor Making council meeting was unable to take place so the Mayor incumbent Gareth Jones continued for 12 months along with the Deputy Mayor, Peter.

Councillor Nixon and Peter were to have been sworn in at a Mayor Making ceremony on Saturday May 16 2020 in the Gatehouse Theatre especially transformed for the meeting which is in fact a full council meeting. The ceremony has been carried out in May for over 400 years since the first Mayor of Stafford Councillor Matthew Craddock was sworn in 1624.

Eventually a virtual meeting was held when Councillor Nixon and Peter were installed.