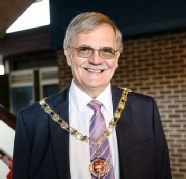 Members of the Stafford Borough Council can be Mayor only once, but Councillors can be the Deputy Mayor often.

In 2018/2019 Eccleshall’s Borough Council Peter Jones and his wife Joy were elected to serve as Deputy Mayor and Deputy Mayoress.

In 2019/2020 they were re-elected to serve again as Deputy Mayor and Deputy Mayoress which set a new historical record, never before had a councillor served back to back terms as the Deputy Mayor.

At the Borough Council meeting held in the County Council chamber on Tuesday February 25 2020 Peter was once again elected to serve as Deputy Mayor for a third term.

Peter and Joy are great believers in maintaining history and in supporting the Mayoralty and have endeavoured to support whoever was the mayor whilst in office.

The Borough Council has a four-year term in office between elections and the size of the political party’s representation on the council decides who will be the Mayor and Deputy Mayor with full council approval for one year from May to May.

In 2020 / 2021 it was the turn of a Labour councillor to be the Mayor and once again Peter chosen to be the Deputy Mayor. However due to the Covid restrictions the Mayor Making council meeting was unable to take place so the Mayor incumbent Gareth Jones continued for 12 months along with the Deputy Mayor, Peter.

Councillor Nixon and Peter were to have been sworn in at a Mayor Making ceremony on Saturday May 16 2020 in the Gatehouse Theatre especially transformed for the meeting which is in fact a full council meeting. The ceremony has been carried out in May for over 400 years since the first Mayor of Stafford Councillor Matthew Craddock was sworn in 1624.

Eventually a virtual meeting was held when Councillor Nixon and Peter were installed.

Peter and his fellow Borough Councillor for the Eccleshall ward Jeremy Pert attend as many meetings of the four parish councils as they can.

Parish Councillor Ros Taylor has created a team of local volunteer including the footpaths marshals to pick up litter around the town.

Doing his bit is Peter Jones who was out litter picking recently. 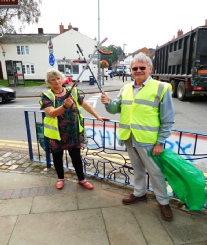 WHAT CAN PETER DO FOR YOU?

As one of the two Borough Councillors for the Eccleshall ward Peter is able to speak on your behalf to officers of the Council regarding the many things that they are responsible for. A popular one is planning applications, your own and neighbours.

The Borough Council is responsible for Planning, Street Scene and Parking, Recreation and Open Spaces, Refuse collections, recycling and much more.

If you have any information about the 'unsolved grimes' below email the Borough Council atgrimewatch@staffordbc.gov.uk or call 01785 619402. All information will be treated in confidence.

Recently opened on the Sancerre Grange development was this play area especially designed for our younger children. It compliments the plays area for younger children on the other side of the estate.

Both area were delayed by the Covid restrictions to ensure our children's safety but are now being fully used.

Peter attended the first face-to-face meeting of the Stafford Borough Council meeting held on Monday May 17. Because of the spacing restrictions the usual council chamber at the County Building was not suitable so the council met at the Rising Brook Community Church at 7pm.

Many of the Borough meetings have now taken place face-to-face and Peter has resumed his place on the Borough Planning Committee which first met on Wednesday June 9. 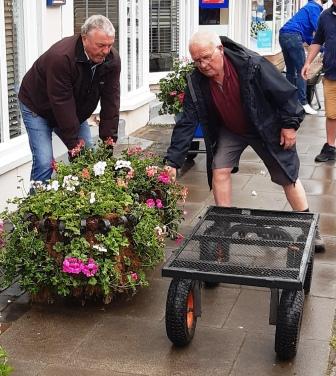 On Sunday 6th June a group of some 30 volunteers from the Ecclian Society and friends gathered to erect over sixty hanginf baskets and over 40 mangers in the town centre.

It was wet and miserable day but the team were undeterred and the task was completed in good time giving our town centre a bright and floral look ready for the summer.

The baskets are always appreciated by residents and the many visitors that we have. 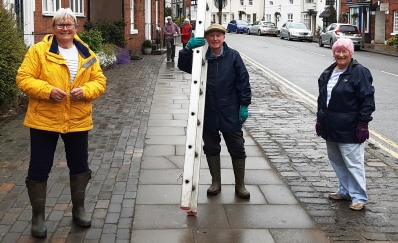